There are two main visual components of place kicking in rugby: alignment and visualisation.

There’s not going to be one correct method for alignment or visualisation for everyone, so there’s likely to be a certain amount of trial and error, for instance in choosing the type of kicking tee that suits you best. 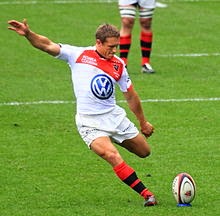 The first part of alignment is to align the tee, and then the ball on the tee. Leigh Halfpenny aligns the tee with the centre of the posts and the seam of the ball with the right hand post, taking into account the natural draw for a right-footed kicker. Similarly, Jonny Wilkinson tilts the ball a little to the left, and Dan Carter at the start of his run up, aims for the left hand post.

As you move forward to kick the ball, the focus should be on the precise point of the ball where you want to make contact .This means picking a spot within the pattern of the ball, as small as a dimple, and keeping a constant fixation on that spot.

Some players have a tendency to lift their head as they kick, to watch the path of the ball. Lifting the head too early will result in a loss of power and control. If this is a persistent problem, you can try keeping a tennis ball under your chin to keep your head down.

When Johnny Wilkinson was taking kicks for England, he’d imagine that there was a lady called Doris whom he could see through the posts sitting in the crowd. I think at one time he imagined she was reading a newspaper. Then he imagined she was holding a drink which he would try and knock out of her hand. He would then have an imaginary line, like an imaginary wire, the ball would follow on its way through the posts to Doris.

Leigh Halfpenny visualises a third post in the middle of the other two. He aims to hit that middle post. If it’s a windy day, he moves that imaginary post slightly to compensate. He imagines that the sweet spot of the ball is attached by a piece of string to that third post. He looks back from the post down the piece of string.

A combination of these ideas might be very effective: for instance, you might imagine a real or fictional character sitting on top of the imaginary third post and pulling the string. Your aim would be to knock that character off their perch.

Visualisation can also be effective in dealing with the pressure of taking the kick. Halfpenny, for instance, always imagines his old training ground of Gorseinon, even when he’s in the Millennium Stadium.

Then it’s just a question of practice, and more practice. If you practice the more difficult kicks, it will make most of the match day kicks seem easier. Halfpenny even takes kicks form the try line to hit the post as a test of his accuracy.

David Donner
Posted by DB at 07:41 No comments: Links to this post

The rugby players I’ve worked with most have been scrum halves, but I think I’d use a similar process for a player in any position.

We began by doing some profiling, which was something some of the players had done and some hadn’t. We looked at the skills required to be a great scrum half, dividing them up into technical, tactical, physical and psychological categories. We used this to work out which areas would be most useful for the players to work on so they could progress to the next level of the game.

I also tried to work out some of the visual requirements for being a scrum half. Whereas most people in this field would think of things like peripheral vision and visual acuity (seeing clearly), I wanted to concentrate more on how these players should use their vision in game situations. So I came up with a list that included things like identifying and focusing on targets when passing and kicking; scanning both sides of the field for overlaps and mis-matches; searching for areas of space behind the defence to attack; and analysing defenders at the ruck to aid decision making.

The players wanted most to work on their passing skills, which we narrowed down to speed and especially accuracy. I started off by getting them to pass a series of balls against a marker on a goal post. This was done from both sides, initially with balls on the ground. Some competition was introduced by timing them against each other. We then set up simulations of passing from a ruck (they had to dig out the ball from under my foot), and from a line out (I would toss the ball over my head for them to catch before passing).

This was all fine, but you’re not passing against a post in a match. In order to do this I needed a receiver, but I wanted to keep to the same levels of accuracy. So I’ve introduced a rule which begins by saying that the receiver must maintain the same body position as he moves forward to catch the ball: no stooping or jumping up allowed. Next, the receiver is also only allowed to move their arms below their elbow. And finally, they can only move their hands to catch the ball – no other arm movement is allowed. The scrum halves score a point for each pass that is successfully caught under these conditions.

I also videoed the players’ passing. It was interesting to see that one player kicked out his back leg as he passed the ball. He had clearly fallen into the habit of doing this in order to keep his balance, and was understandably reluctant to change his technique. I did feel, however, that this was a sign that he was inherently unstable when he passed, and this explained why he would sometimes lift his head when he let go of the ball. This also helped to keep his centre of gravity more central, and stopped him from falling over. Unfortunately, it also meant that the ball would fly over the receiver’s head.

David Donner
Posted by DB at 08:22 No comments: Links to this post