I recently received a call from a lady whose 14-year old son plays in the school cricket team. She told me that his coach had noticed that he had difficulty with balls above eye level and thought he might have an eye problem.

I assumed from this that the problem was when he was batting, dealing with short-pitched deliveries. So when he came in for his appointment, and after establishing that he had no significant prescription, I asked him if he had problems dealing with bouncers. He replied that he had no problem, as he always ducked out of the way. He did, however, have some difficulty with balls that were angled into him. It turned out that the coach’s remark referred to trying to catch a ball that had been skied in the air.

I wasn’t sure whether this was a problem of technique or of being afraid of a hard ball, so I tried to come up with a strategy to cover both. I explained that it’s easy to lose confidence once you’ve dropped one or two catches, and you can start hoping the ball doesn’t come to you. This means that when another does come your way you are slow to get into position, and you are nervous, which makes your body stiff and the ball more likely to bounce out. 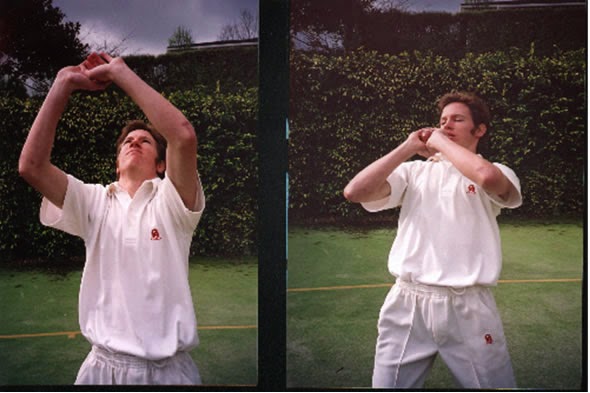 The important thing, therefore, is to build up confidence by starting with easy catches using a tennis ball, but with prefect technique. There are two ways of catching a high ball, and I think that optically the better of the two is the “reverse cup”, also known as the Australian method, in which the hands are reversed with the thumbs are interlinked. The advantage of this method is that you can watch the ball right into your hands, whereas that’s almost impossible with the “Orthodox” or English method (little fingers interlinked) when the ball is dropping past your face. Another advantage of the Australian method is that if the ball does bounce out, it’s easier to grab it again before it hits the ground. Some people actually manage to watch the path of the ball through the gap between their thumbs, which can give this method a third advantage. 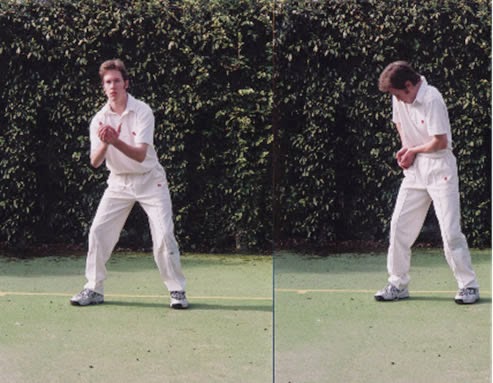 People often talk about “soft hands”, but you don’t want them to be too soft and floppy. It’s more important that your shoulders aren’t tense, and shoulder tension is a major reason for the hands not “giving” when taking the catch.

The idea is to gradually increase the height of the ball which can be achieved by getting someone to hit it up with a tennis racket. Then you can move on to catching a cricket ball, again starting with lower heights.

When confident with catches that are straight to you, you can move on to catches for which you have to run. It’s essential that you look carefully at the point when the ball is at its maximum height, so your brain can tell (instinctively) when gravity will bring it down to a catching height. As you run to take the catch, the aim is to get in such a position that the ball looks as if it’s going in a straight line towards you, and not off to the side. It should also appear to be going at a steady speed: if it looks to be accelerating upwards, you need to move back; if it’s accelerating downwards, you need to me forwards.

When you do take a good catch, you need to take time to recall it in as much detail as possible, and to use this as part of your visualisation practice and match preparation. If he takes all this on board, our young cricketer should soon be hoping the batsman will sky a shot in his direction, anticipating and relishing the chance to impress the coach.

(images:cricketweb.net)
Posted by DB at 07:24 No comments: