Much of my early work in sports vision was in golf. I was once part of a team that did some vision screening at a golf academy in Sussex. At that time I was still thinking like an optometrist, looking for eye problems that could be solved in a conventional way, for instance with contact lenses. 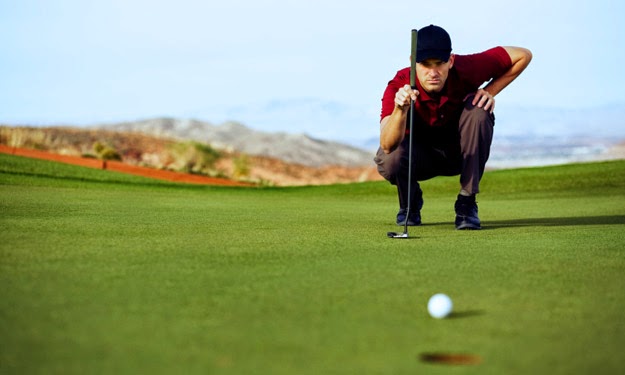 We found no problems with the eyes of nearly all the students. There was just one young man who’d always had a weak eye (if I remember rightly he had a small squint). His problem was reading the greens. Apparently, when he had another player read the greens for him, he’d won a tournament. It was only some time afterwards that I thought that if I had an expert telling where to aim, I still wouldn’t win any tournaments, but I’d play an awful lot better golf than normal.

There’s no doubt that being monocular would be a disadvantage for professional golf. But at the risk of seeming harsh, I did wonder if this chap was starting to see lack of binocular vision as a reason for failure, rather than being determined not to let it hold him back.

Since then, my focus has shifted more to the “software” side of vision: in particular, how experts use their vision in sport. One “hardware” issue that often crops up in golf, however, is eye dominance. Over the years I’ve seen many golfers, from the very young to quite elderly, who feel their eyesight is letting them down when they’re putting.
putt
It’s always necessary to do a full eye examination to rule out problems with their prescription or eye health, but the next thing I do is to check their eye dominance. I get them to place their right hand over their left, leaving a little gap between their thumbs and forefingers. Standing a few feet away, I get them to raise their arms and to look at my nose through the hole they’ve made. It’s easy to see which eye they are using for alignment. I then get them to repeat the test, but with their left hand over their right. If there’s any hesitation or inconsistency, I get them to do this a few times.

I then put a golf ball in front of them and get them to set up in their normal putting stance. I put another ball on the floor about twenty feet away. I ask them to put their hands together, roughly as if they were holding a club, but in such as way as again to leave a small gap they can look through. I ask them to line up with the contact point on the ball. If they close each eye in turn they can tell which the aligning eye is. I then ask them to play an imaginary shot to the other ball, and again see which eye is aligning.

I’ve found on a number of occasions that they are aligning with different eyes for different parts of the stroke, and I believe that this can cause their shot to stray slightly off target. If they’ve shown consistent eye dominance in the first assessment, I try and get them to use that eye all the way through their putting. It usually just requires a small change in head position to achieve this, and people report greater putting consistency as a result.

If you have a sporting problem you think might be vision-related, you can email me at donneroptometrists@gmail.com
Posted by DB at 06:39 No comments: