A friend of mine recently told me that he’d been invited to do some clay pigeon shooting. He was concerned that he wasn’t sure which eye he should be using when aiming.

This brings us back to our old friend, eye dominance. If you are aligning one object, such as the end of a gun, with another object, such as a clay pigeon, you can only do this accurately with one eye – the “dominant” or sighting eye – as the other eye will be slightly out of line. 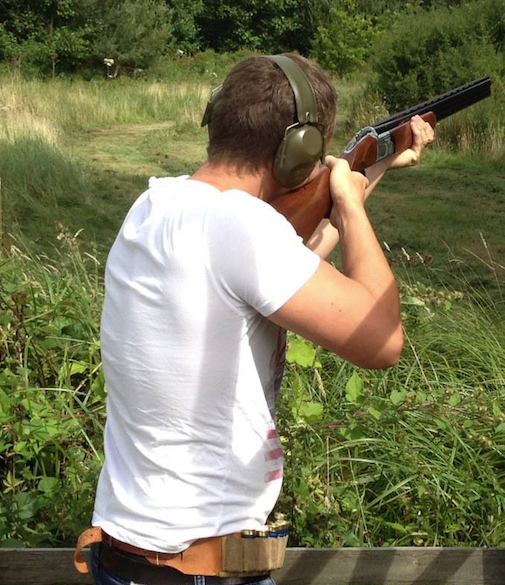 If you are right-handed and right eye dominant, there’s no problem. But if your gun is in front of your right eye, and you are aligning with your left eye, your shot will slightly off target. So my first piece of advice was to check his eye dominance in something that approximated a shooting condition (some people, including myself, use different eyes to align depending on which arm is pointing). He could do this with a simple stick, held as if it were a gun, and pointed towards a distant object such as an aerial on a roof. He simply closes each eye in turn to see which is in alignment.

He discovered that when he closed his right eye he was aligned, but not when he closed his left. As he is right-handed, this would mean that his shots would be a bit to the left of the target. He could counter this by aiming slightly right of the target if it’s coming overhead. You normally need to aim in front of the clay to take into account its movement after the shot. But if the target is coming from his right he should aim straight at it; and if it is coming from his left he’d need to aim even a bit further ahead of the clay than usual.

If all that seems too complicated, a simple answer would be to close his left eye, although that’s not ideal as you do lose some perceptual information. It can, however work as a quick fix. In the event, my friend used a combination of these strategies, and he seemed to feel he got on pretty well for a beginner.

Somebody who is shooting regularly and has this “cross-dominance” problem may be able to learn to shoot left-handed. Otherwise, there are some products available. “Shotspot” is an opaque circle that you put on the centre of the lens of the dominant eye. This distorts the central image enough to make you use the non-dominant eye. Some wrap-around sunglass suppliers offer a choice of interchangeable lenses, so you can have a yellow or clear lens in front of you non-dominant eye, and a dark lens in front of your dominant one. The yellow lens might be more effective than the clear one because it will enhance the contrast, especially in poor light conditions.

For more advanced levels, there is a product called “Easy Hit!!” This is a fibre optic bead that is attached to the gun barrel. The idea of this product is to encourage the non-dominant eye to align, without disturbing the vision of the dominant eye as the shooter naturally aligns their non-dominant eye with this fluorescent bead. This therefore seems to give a more natural vision, and for £30 seems good value.

David Donner
Posted by DB at 07:02 No comments: Links to this post